My 10 minute drive home from work tonight was... eventful. Good and bad, and now I'm both elated and worried sick.

I checked my voice mail (in case you're wondering, the car links to my phone via BlueTooth and acts as a speaker phone) and had two messages.

One was from one of the people behind the Save The Sarah Connor Chronicles campaign. They've been running a sweepstakes and, holy crap, I won the grand prize! Soon I'll be receiving a blu-ray player (which I've been wanting to steal buy ever since I found out that the blu-ray for Terminator: Salvation will be loaded with extras while the DVD will have squat), and I'll also be getting this: 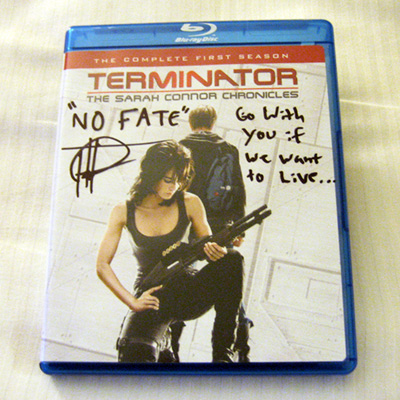 It's season one of TSCC, autographed by Thomas Dekker (John Connor). Not damn bad!!! Needless to say, it's going into the Terminator Shrine.

I'd be overjoyed right now were it not for the second voice mail message, which was from my dad. He's in the hospital. As of right now they don't know what's wrong, but there's a good chance that it's serious. I called my sister after I got home to get further information, but at the moment it doesn't look like there is much. I'll be calling Dad in the morning. In the meantime, how the hell do I respond to such a nondescript-but-clearly-serious situation?

Until the situation with Dad is resolved, I'm considering any plans to be tentative. Unless it turns out to be a whole lot of nothing, I'll be going to visit him some time soon. Stay tuned...
Collapse